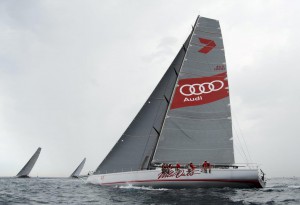 Wild Oats XI heads away from the start in the Transpac Race 2015. (Image: Doug Gifford/Ultimate Sailing)

Two Australian supermaxi yachts, Wild Oats XI and Ragamuffin, were fighting for the lead in their division following the start in the Transpac Race from Los Angeles to Hawaii today.

Only boat lengths separated the pair as they rounded the northern tip of Santa Catalina Island, two hours into the race and 20 nautical miles off the coast. From there they headed out into the massive expanse of the North Pacific, the crews knowing the next land they would sight would be the coast of Hawaii more than 2000 nautical miles away to the south west.

Wild Oats XI, competing under a co-charter arrangement between Californian yachtsman Roy P. Disney, and the yacht’s Australian owner, Bob Oatley AO, set sail as a hot favourite to be first to finish in her class and score the fastest time in the 61 yacht fleet. So, it was a surprise for many today to see Ragamuffin, with her 88-year-old owner, Syd Fischer, on board, as close as she was to Wild Oats XI. But it wasn’t for Wild Oats XI’s skipper, Mark Richards.

Prior to leaving the dock at San Pedro for the 1pm start today, Richards said he was looking forward to a match race with Ragamuffin for most, if not all, of the race.

He and his 15-man crew were certainly experiencing that in the tight, cross-wind stretch from the start to Santa Catalina Island. They were perfect sailing conditions for the wide-hulled Ragamuffin.

However, with the forecast being for light and variable winds through the night and well into tomorrow, the Wild Oats XI crew was hoping their slim-lined yacht would make considerable gains on Ragamuffin, but that was far from certain.

“Roy Disney has done 20 Transpacs, and he says the weather pattern predicted for this year’s race is the most unusual he’s ever seen” Mark Richards said. “We’re just going to have to stay on our toes, work hard around the clock, take what weather we get and do the best we can with it.”

The unusual nature of the weather was obvious from the outset. The light wind changed direction through 180 degrees twice in the 30 minutes leading up to the start. Then, when the fleet of 16 yachts got underway amid a fleet of more than 200 spectator craft, it was under lead-grey skies which delivered lightning, the sound of rolling thunder, scattered showers and a baffling breeze.

The Transpac race is staged via a series of staggered starts scheduled over five days. The divisions that started last Monday and Thursday have enjoyed near perfect downwind sailing conditions to date, but that won’t be the case for today’s fleet. The current weather prognosis suggests that to reach the finish in the fastest possible time these late starters will need to sail between 300 and 400 nautical miles more than the rhumb line course – the shortest possible distance to Hawaii. Their route, which should take seven days to cover, sees the yachts sail well north of the rhumb line to a point where they can expect to find the most favourable strong winds.

There is, however, one plus-side to this course: it means the yachts will sail around, and not through, the huge field of dangerous debris and rubbish that is circling in the mid Pacific. 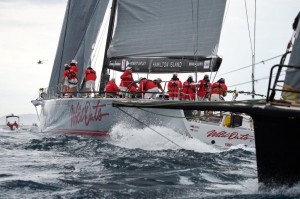 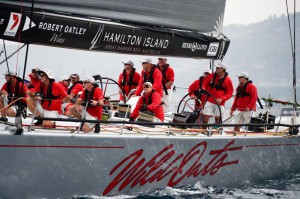 Anxious times for the crew as Wild Oats XI manoeuvres for the start of the Transpac Race 2015 (Image: Doug Gifford/Ultimate Sailing)