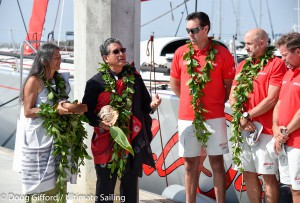 The 16 burly crew of Australian supermaxi yacht, Wild Oats XI, resorted to hula dancing on the dock today in San Pedro today in the hope they could motivate the weather Gods into delivering winds stronger than forecast for the Transpac Race from Los Angeles to Hawaii, which starts tomorrow.

Unfortunately though, if the Gods judged the hula effort on technique, there’s little chance that Australia’s most successful ocean racing yacht will get the wind she needs to come close to finishing inside the monohull race record. That time of 5 days, 14 hours, 36 minutes, 20 seconds, was set by New Zealand’s Neville Crichton in 2009, sailing Alfa Romeo II.

The hula came at the end of a traditional Hawaiian blessing ceremony for Wild Oats XI, which will be competing in the 2225 nautical mile Transpac as a co-charter entry between Californian sailing identity, Roy P. Disney, of Disneyland fame, and the yacht’s Australian owner, Bob Oatley AO. The moving ceremony, intended to keep the yacht and crew safe while crossing such a great expanse of ocean, was conducted by a highly respected local Hawaiian couple, Danny Akaka Jr and his wife, Anna. It has been a pre-race custom for Disney, and his late father, Roy E. Disney, for the past 10 Transpacs.

The latest forecast for the race start off the coast of Los Angeles at 1pm (local time) tomorrow is for moderate winds. However, for at least the first 24 hours after the yachts round nearby Catalina Island and target the finish line off Honolulu – more than 2000 nautical miles away – the prognosis is for generally light and variable breezes.

“It’s not what we’d hoped for, but you have to take what comes your way in this race,” said Wild Oats XI’s skipper, Mark Richards. “The hurricane which we had hoped would give us a fast run for much of the way has now dissipated and stayed in the south, so we are going to struggle to get away from the coast and towards the tradewind belt over the first day or so.

“The one advantage we do have with this yacht is that we don’t need much wind to get her moving at 10 knots or more. Hopefully the hula effort was at least good enough to get us what’s needed to achieve that.”

The Wild Oats XI crew for what is the 48th staging of the Transpac race comprises eight Australians, six Americans and two New Zealanders.

With sail testing and crew training having been completed, most of the team spent yesterday stacking food and sails on board and doing a final rig and equipment check. Meanwhile, replacement navigator Nick White, who arrived in Los Angeles from New Zealand yesterday, was below deck at the navigation station for much of the time, calculating the fastest course options available to Wild Oats XI in various conditions. As well as being an excellent navigator, White is an expert meteorologist. 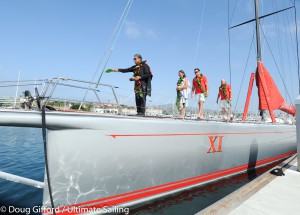