If you are into sailing in Australia you will probably know his name, and you will no doubt have seen his images hundreds of times. However, for the majority of sailors, putting a face to his name would be an impossible task.

The man is Andrea Francolini, and as you might guess, the 43-year-old is of Italian descent.  He was born in Milan, but after 14 years of being in Australia he now considers himself to be as much an Aussie as he is an Italian.

Today he stands tall in the world of yachting photographers. He has more than 140 cover shots to his credit in Australia, and for the past three years he has been a finalist in the international Mirabaud Yachting Photographer of the Year awards. 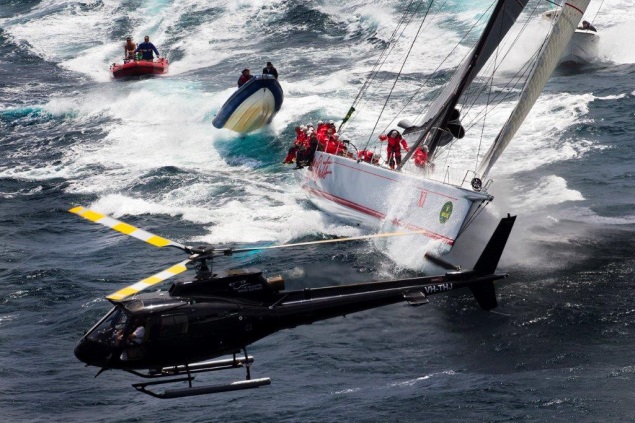 That’s high recognition for someone whose entrée into that world of yachting photography literally came by accident.

Andrea revealed an aptitude for artistic creativity during his school years, and this led to him pursuing a career as a graphic designer. There was a problem however: his talents didn’t extend to being able to draw, so he soon turned to photography to illustrate his thoughts and theories.

About the same time a cousin who was an avid sailor asked Andrea to join him aboard his small sailboat at the picturesque Lake Como, 40 kilometres to the north of Milan, for a day’s outing, and Andrea agreed. He took his camera with him to get some nice shots of the magnificent scenery around the lake, but fate intervened and the life of a yachting photographer emerged … literally, with a splash.

As Andrea was preparing to step from the dock onto the boat a gust of wind suddenly filled the sails. Equally suddenly, the boat took off, so Andrea decided to make a leap for it. Unfortunately though, by the time he was in mid-air, the gap between dock and the deck had expanded far too fast, and his pier-head leap failed in spectacular fashion. Instead of being “on” Lake Como, young Andrea was then “in” it.

For some unknown reason the cousin kept sailing away, so a sodden and somewhat embarrassed Andrea clambered back onto the dock so he could drip-dry in the warmth of the summer sun. It was while he was standing there that he became captivated by the symmetry and motion of the boats sailing on the lake, so he took out his camera – which he’d somehow managed to keep dry – and began photographing them. Before long people were coming to him on the dock asking if they could buy copies of the images he was taking, and from that moment the life of a commercial yachting photographer was born.

Andrea’s work soon came to the attention of one of the greats of international yachting photography, Carlo Borlenghi, and this led to the multi-lingual Andrea was working with him as an assistant. He could not have wanted for a better tutor.

After two years with Carlo, Andrea decided it was time to go solo, and for reasons he can’t explain, he found himself heading for Australia in late 2000 to look for work. He arrived in Sydney on December 12, and 14 days later he was on the harbour photographing the start of the Sydney Hobart race.

On Boxing Day this year – 14 years after he arrived in Australia – Andrea will be at the start of the Rolex Sydney Hobart race as official photographer for Bob Oatley’s supermaxi, Wild Oats XI, as well as one of the yacht’s principal sponsors, Audi. He has been the official photographer for Wild Oats XI from the time prior to construction starting in 2005, and has held the same role for the Oatley’s, and for Audi at Audi Hamilton Island Race Week, for the past decade.

Today seventy-five per cent of his business is marine related – everything from dinghies and skiffs to supermaxis and superyachts. The remainder of his photographic work is commercial, social and scenic.

Inevitably, his work as a yachting photographer has had some hair-raising moments, none more so than the time when the photo boat he was aboard at the Swan Cup in Sardinia ran out of fuel just as the fleet was charging towards it from metres away. The driver panicked and jumped overboard, but miraculously, disaster was averted.

Beyond photography Andrea has established a charity, My First School, to help children in remote regions of Pakistan get a better education. The money he raises goes primarily towards providing facilities, including furniture and small buildings, but this year he has also been able to provide enough funding to guarantee the education of three youngsters for the next five years.