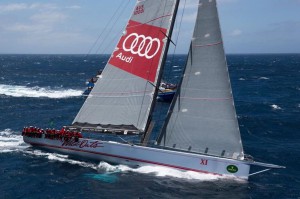 By Grand Prix ocean racing standards she’s an old girl, and there’s no denying she’s had a few makeovers during the past decade, but Bob Oatley’s 30-metre long supermaxi, Wild Oats XI, was leaving no doubt today that when it came to speed she’s still got great legs.
The aging beauty was this afternoon leading the entire fleet across Bass Strait in the 70th anniversary Rolex Sydney Hobart race.
At the time her strongest challenger, the new American supermaxi, Comanche (owned by Jim and Kristy Clark and skippered by Ken Read), was six miles back in Wild Oats’ wake.
This year ‘The Oats’ is going for an historic eighth line honours in the classic, but, while she was in the lead today the end result was far from a foregone conclusion: more than half the 628 nautical mile course was still to be covered.
Regardless, the old girl was doing everything asked of her.
From the time the race started 24 hours earlier, Wild Oats XI’s skipper, Mark ‘Ricko’ Richards, and his talented 19-man crew, had hunted Comanche all the way down the south coast of New South Wales. Rarely was the pair more than one mile apart.
To some degree though, it was a frustrating pursuit for the Wild oats team as the radical, ultra-wide and untried Comanche was proving to be fast sailing upwind in a 20-25 knot southerly wind and choppy seas – conditions where Wild Oats XI was expected to be superior.
However, not long after sun-up today, the winds went lighter off the southeast corner of the Australian mainland, and the slim-line Wild Oats XI began chopping into Comanche’s advantage. After a couple of hours she had drawn level with the leader, which was about half a nautical mile off to leeward. Then, when powered-up by a new, maximum size Code Zero headsail, the Old Girl began to pull away. By mid-afternoon the gap between leader and pursuer was the largest of the race so far … six nautical miles.
Wild Oats XI’s Spanish navigator, Juan Vila, confirmed the hard yards were still ahead of the Australian yacht in the race for line honours – there were many more hurdles to clear before reaching the finish line on the Derwent River, immediately adjacent to downtown Hobart.
In a satellite phone conversation Vila said: “Later this afternoon the wind will be westerly, and that will suit Comanche more than us. Everyone saw at the start yesterday how fast Comanche can be in those conditions, so it’s going to be hard to hold her out. But, later tonight and early tomorrow, the wind will be light again, and that should be in our favour.”
Yachting meteorologist Roger Badham elaborated on the weather outlook: “The wind will stay at less than 10 knots until 7pm then slowly build from the northwest and north until peaking at 25 knots around 3am. That will make for a fast downwind run. After that it will ease as the leaders close on Tasman Island (44 miles for the finish).”
Badham added that he expected the lead yacht to be at the entrance to the Derwent River around 2pm tomorrow. He also said that it was possible the race for line honours would be decided over the final 11 nautical miles up-river to the finish.
For more information, please contact:
Rob Mundle
Media Manager – Wild Oats XI
+61 (0)417 323 573 rob.mundle@bigpond.com