By wildoats February 27, 2015 Uncategorised No Comments
0

It will be wheels, not water, from Sydney to Hobart for the nucleus of the crew of Rolex Sydney Hobart race record Holder, Wild Oats XI, starting in Sydney this weekend.

This time, instead of it being a record breaking run over 628 nautical miles for Bob Oatley’s supermaxi, the team will be covering a gruelling 2167 kilometres by bicycle from Sydney to Hobart. It’s a trip that will take 15 days to complete – more than 13 days longer than Wild Oats XI’s record time for the Sydney Hobart race.

It’s all in the name of charity. The Wild Oats XI sailors will be among more than 100 cyclists taking part in the Variety Cycle, a Variety Club charity event where it is hoped $1 million will be raised to support sick and disadvantaged children in Australia.

Ironically, it was Wild Oats XI crewmember, Steve “Mothy” Jarvin (a veteran of 27 Sydney Hobarts, including all 10 of Wild Oats XI’s races) who came up with the concept of a fund-raising ride from Sydney to Hobart after he completed the last Variety Cycle from Sydney to Uluru.

Jarvin and two other Wild Oats XI team members, Nathan Ellis and Bryce Rutherford, will be doing the ride from start to finish, while seven others, including skipper Mark Richards and tactician Iain Murray, will do some of the 15 stages.

Additionally, one of Wild Oats XI’s major supporters, Audi, has come on board for the Variety Cycle by supplying support vehicles.

The first stage of the Variety Cycle over 177 kilometres from Sydney to Nowra will start in Centennial Park, on the outskirts of the CBD, at 9am tomorrow, Saturday, February 28. Anyone wishing to support the Wild Oats XI team via a donation, or wanting to find out more about the Variety Cycle, can go the event website, www.thevarietycycle.com.au 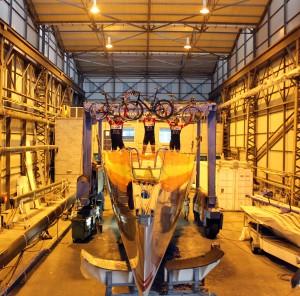