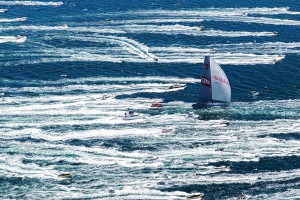 The escort: Wild Oats XI surges up the Derwent River towards Hobart amid a sea of white on her way to a historic eighth line honours victory in the Rolex Sydney Hobart Yacht Race. (Credit: Andrea Francolini/AUDI)

It was the space of just six nautical miles that made the difference when it came to Bob Oatley’s supermaxi, Wild Oats XI, claiming a historic eighth line honours in the 628 nautical mile Rolex Sydney Hobart race.
Having carefully analysed the weather prognosis for the race, skipper Mark Richards, Spanish navigator Juan Vila, and tactician Iain Murray, pre-determined a point in Bass Strait that they were convinced the yacht must reach as quickly as possible if they were to avoid being trapped by a forecast pocket of little or no wind.

When they reached that point two days ago, Wild Oats had come from behind in very light winds and was then leading their powerful American challenger for line honours, Comanche, by six miles – and that made all the difference.
Once at that point, Wild Oats XI nosed her way into the anticipated building breeze and accelerated while the Comanche (owned by Jim Clark and Kristy Hinze Clark, and skippered by Ken Read) struggled to free herself from the shackles of a near calm. Hours later, in the depth of the night far off Tasmania’s east coast, Wild Oats held a lead of around 40 nautical miles. This would prove to be a buffer large enough to absorb a late challenge from Comanche in the battle to be first into Hobart.
At times both yachts had charged through the night at more than 30 knots, but soon after sunrise Wild Oats XI hit an expected zone of light wind while Comanche continued to close the gap. Mark Richards said: “We expected our lead to be compressed, and it was.”
There were anxious times for everyone – sailors and race followers alike – as Comanche continued to make gains. But the advantage Wild Oats XI had established earlier withstood the test.
What followed was the most spectacular finish seen in the race’s 70-year history, Wild Oats was escorted up the Derwent River by hundreds of small boats, their wakes leaving a swathe of white water that looked like vapour trails. At the same time thousands of people lined the river banks and the docks to welcome the big boat to their city.

Bob Oatley, aged 86, was dockside to greet his yacht and crew. Inevitably the media descended on him with the big question: “Will you be going for a ninth win next year?” His answer was simple: “Ten wins sounds better to me.”
Comanche finished to a similarly rapturous welcome 49 minutes astern of Wild Oats XI.

Once that yacht was at the dock, and after Richards, Read and Clark had saluted each other’s efforts, Clark delivered more good news: his yacht would be back for the Hobart race in two years.
Later last night, when the Wild Oats XI’s crew celebrated their win at a dinner, both Bob Oatley and Mark Richards praised the crew for the relentless, round-the-clock effort that led to the historic victory. They also welcomed Audi into the “Wild Oats Family” as a sponsor.

This year’s line honours win further cements Wild Oats XI’s place as the most successful yacht to have contested the race in its 70-year history, and Mark Richards as the most successful skipper. Since being launched for the 2005 Hobart race, Wild Oats XI has become the only yacht to secure the triple-crown – line and handicap honours and a race record time – on two occasions. She is also the only yacht to have achieved four consecutive line honours.