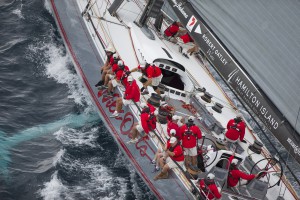 After a challenging and slow first night at sea, where squalls and near calms associated with thunderstorms had a significant influence on progress, Australian supermaxi, Wild Oats XI, was back to full flight today in the Transpac Race 2015.

“Right now we’re averaging around 19 knots and aiming straight at the Barn Door – Hawaii,” said the yacht’s obviously delighted navigator, Nick White, early today. “It’s fantastic downwind sailing. You couldn’t ask for much better … except we’d like some sunshine instead of heavy cloud.”

White, who is also Wild Oats XI’s on-board meteorologist, said the first 18 hours since yesterday’s start of the 2225 nautical mile Transpac race from Los Angeles to Honolulu, had been both baffling and frustrating.

“As it turned out, the forecasts proved to be completely unreliable,” White said. “We had to ignore them and do our own thing in the conditions we were experiencing at the time. It was really tough tactically, especially when we were trying to get around Santa Catalina Island and out to sea.”

There was one other challenge for the crew during the night: all the electronic instruments failed, so they were “sailing blind”. Fortunately, the fault was located within a short time and repairs made.

White said that Wild Oats XI and the other Australian supermaxi in the race, Ragamuffin (Syd Fischer), had been in close company for many hours during the night, until Ragamuffin changed course and headed north of the rhumb line. Wild Oats XI stayed just to the south of the line, which is the most direct course to the finish

This morning’s satellite tracking of the fleet revealed Ragamuffin and other big boats in the fleet were sailing about 40 degrees above Wild Oats XI’s course, and slightly slower. However, as White pointed out, there was still more than 2000 nautical miles to go in the classic, and with the forecasts already proving inaccurate, it would be some time before it became apparent which course choice was the right one. Regardless, he did add, “We are certainly happy with where we are right now.”

Wild Oats XI, which is being campaigned in this event by Californian yachtsman, Roy P. Disney, and the yacht’s Australian owner, Bob Oatley AO, was part of the last of three fleets in the race that departed Los Angeles over a five day period. This morning the leading yachts, which were in the first fleet to set sail, were about 1000 nautical miles ahead of Wild Oats XI and had another 1000 nautical miles to go to the finish line.

Interestingly, with Wild Oats XI and other larger entries sailing at more than twice the speed of the leaders, there just might be a grandstand finish off Honolulu later in the week.