In foreign waters… Wild Oats XI leaves the dock in Los Angeles today for her first day of trials in the build-up to the start of the Transpac Race to Hawaii next Saturday. (Image: Rob Mundle/Wild Oats XI)

Stan Honey, the man intended to navigate record breaking Australian supermaxi yacht, Wild Oats XI, in the Transpac race from Los Angeles to Hawaii, has been injured at sea during another event and is in doubt for the start of the 2225 nautical mile race next Saturday.

Honey, arguably the world’s best ocean racing navigator, was apparently knocked unconscious aboard the 30.5 metres long American supermaxi, Comanche, which is competing in the Trans-Atlantic race from Newport, Rhode Island to England. The extent of his injuries are unknown, however, the Wild Oats XI crew has been contacted and advised to have a replacement navigator on stand-by.

At the time of the incident Comanche – which finished second to Wild Oats XI in the most recent Rolex Sydney Hobart race – was averaging better than 25 knots on what was a 24-hour run that exceeded 600 nautical miles.

“It appears that he had a fall and was knocked out aboard Comanche, something that’s not hard to do when sailing in the conditions they are experiencing,” Wild Oats XI’s skipper, Mark Richards, said today. “The latest information is that Comanche is averaging 24.5 knots and is 600 nautical miles from the finish line. All we can do right now is to wait for an update on Stan’s condition and hope he’s OK. In the meantime we will have another navigator ready to go for the Transpac race if required.”

Wild Oats XI is entered in the Transpac race under a co-charter arrangement between prominent Californian businessman and sailor, Roy P. Disney, and the yacht’s Australian owner, Bob Oatley AO. The crew of 16 comprises six Americans, nine Australians and one New Zealander.

Disney is a direct descendent of the legendary Walt Disney, founder of Disneyland. He and his American team will bring the experience of more than 100 Transpac races to the Wild Oats XI Transpac campaign. He is also recognised as one of the most successful competitors in the biennial event, which was first contested in 1906.

To show he is as much a member of the team as anyone else, Disney volunteered to jump into the ocean off Los Angeles today and be the “target” for the compulsory pre-race man-overboard recovery exercise. With that task complete he and the crew then set and checked many of the sails, including a new spinnaker made specifically for this downwind race. 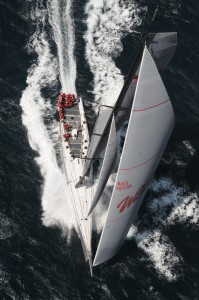 The crew is hoping they will get these conditions in the Transpac Race from Los Angeles to Hawaii, starting next Saturday. (Image: Rolex)