By wildoats December 24, 2016 Uncategorised No Comments
0 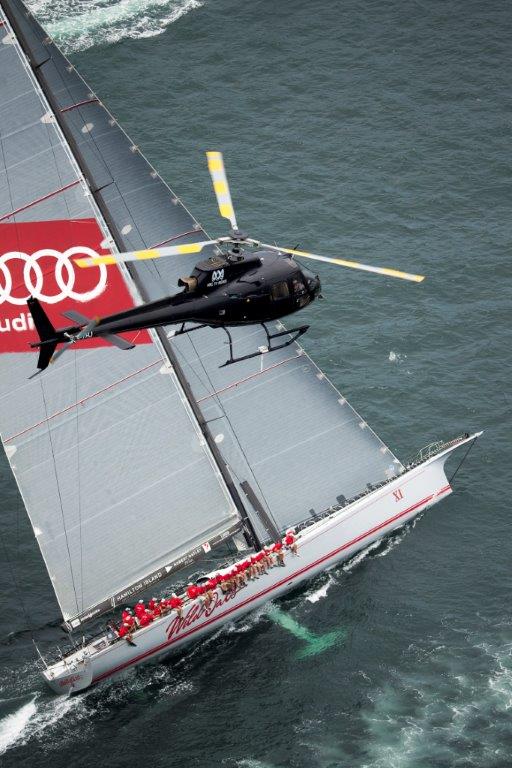 Santa looks destined to make a late delivery to the big guns in the Rolex Sydney Hobart Yacht Race starting Boxing Day: a rapid and record-breaking downwind sleigh ride to Hobart.
Forty-eight hours out from the start of the race on Sydney Harbour the weather forecast suggests that at least six hours could be lopped off the record time for the 628 nautical mile course.
And, much to the delight of the crews aboard all 89 yachts in the fleet, the southerly change forecast for the first night will not be as strong or adverse as originally predicted.
The outlook is for a 15-knot north-easterly wind for the start then near 30 knots from the same direction for the spinnaker run south. If that is the case then the frontrunners could be close to entering Bass Strait, 200 nautical miles south from Sydney, by the time the southerly change arrives around midnight.
Mark Richards, skipper of the Oatley family’s race record holder, Wild Oats XI, agreed that a new time for the course was a distinct possibility. The 30-metre long Wild Oats is the most successful yacht to have contested the Hobart race in its 71-year history. This year she will be going for her 9th line honours in 12 starts, and might be in the running for her third handicap victory.
“It’s a good forecast for a fast ride,” Richards said, “but we must keep reminding ourselves it’s a Hobart race, and anything can happen, as we found out last year.”
In that race Wild Oats XI was forced to retire when an effort to reef the mainsail went horribly wrong and the sail shredded.
“You’re only as good as your last race, and we weren’t good last year,” Richards said today. “Everything about that campaign was way too rushed, so we lacked the time needed for proper preparation. It’s a different story this year.”
However, Richards was quick to point out that while his charge had been installed as favourite for line honours, there were three other supermaxis very much in the running – Perpetual Loyal (Anthony Bell), Scallywag (Seng Huang Lee) and CQS (Ludde Ingvall). Loyal has been completely rebuilt during the past year and had the crew reinforced with the addition of 11 of the team from last year’s line honours winner, the radical American supermaxi, Comanche. Scallywag (ex Ragamuffin 100) has also been upgraded under the guidance of hard-driving skipper David Witt, while the radical CQS goes into the race as an unknown quantity.
Richards wouldn’t allude to what he thinks the outcome of the race for line honours this year might be, but he did suggest that Wild Oats XI’s new hull shape had made her considerably faster.
“If we experience the strong downwind conditions forecast for the east coast of Tasmania then Wild Oats XI could average between 25 and 30 knots,” he said.
But above all, he and the entire 22-man crew were out to do the best they could in the memory of the yacht’s late owner, Bob Oatley, who died in January this year aged 87.
“We know Bob will be with us in spirit,” Richards said, “and we’ll have the voodoo stick – his walking stick – with us for good luck.”
Wild Oats XI’s current race record time is 1 day, 18 hours, 23 minutes and 12 seconds, set in 2012. She also won the race on corrected time in 2005 and 2012.
For more information contact:
Rob Mundle
Wild oats XI Media Manager
Phone: 0417 323 573
E: rob.mundle@bigpond.com