By wildoats December 21, 2015 Uncategorised No Comments
0 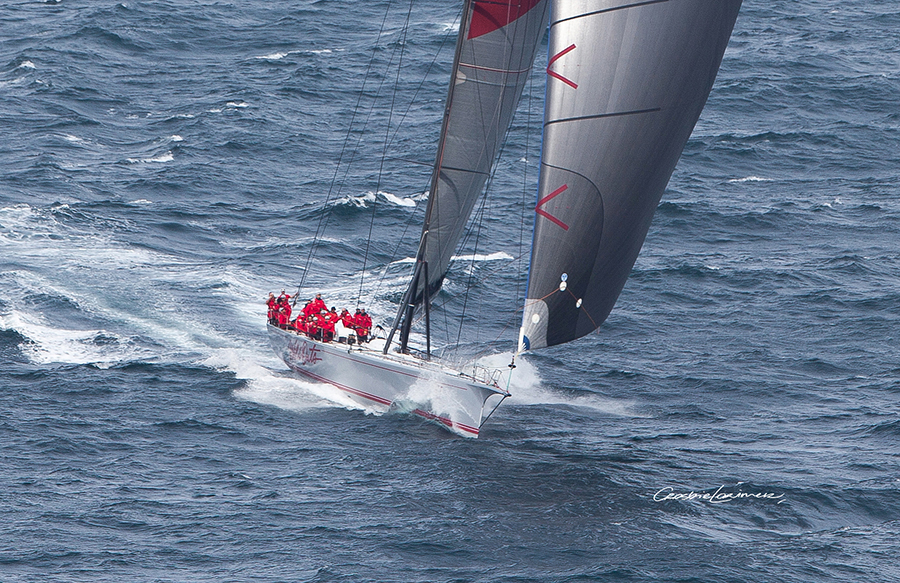 Wild Oats XI carves her way back into Sydney Harbour after a training run this week. (Image credit: Dale Lorimer)

A weather forecast for the Rolex Sydney Hobart race issued early today was ringing alarm bells to the point today where Iain Murray, the tactician aboard Bob and Sandy Oatley’s supermaxi Wild Oats XI, suggested the start of the race might have to be delayed if it proved correct.

The outlook for Bass Strait, which was the scene of the tragedy in the 1998 Hobart Race, was, according to one of the computer generated weather models, likely to see howling south-westerly headwinds of up to 40 knots, and powerful, breaking seas.

By late today that outlook was not as bad, but according to highly respected yachting meteorologist, Roger Badham, nothing was certain; the real prognosis would not be known until about 48 hours before the race start on Boxing Day.

“The forecast is far from set in stone,” Badham said. “Right now it has the appearance of the 1998 Hobart Race, but not with the same intensity. There are many factors influencing the outlook, including a cyclone that should form in the next day or so over northern Queensland.”

Badham also said that the fleet of 109 yachts could expect a challenging run south under spinnaker once clear of Sydney Harbour as the north easterly wind expected for the start could peak at around 30 knots.

“It depends on how fast the yachts are and how far south they get as to when they will be hit by the south westerly change,” Badham added, “But, it is safe to say that on the current prognosis it will be somewhere between Jervis Bay (80 miles south of Sydney) and Gabo Island, at the entrance to Bass Strait, that they will be confronted by headwinds.”

The forecast strong north easterly wind at the start could see Wild Oats XI, skippered by Mark Richards, and arch rival American supermaxi, Comanche (Jim Clark/Ken Read) surfing down the New South Wales coast at between 25 and 30 knots. If so, the leaders could be well into Bass Strait and near the halfway mark of the 628 nautical mile course by the time the change sweeps in from the southwest.

It remains uncertain as to how long the headwinds will last, but they are expected to abate and eventually turn east-north east.

Wild Oats XI will be lifted from the water at Woolwich Dock at 7.30am tomorrow for her final rubdown and hull check. Comanche and another American line and handicap honours contender, Rambler 88 (George David), are also docked at Woolwich.