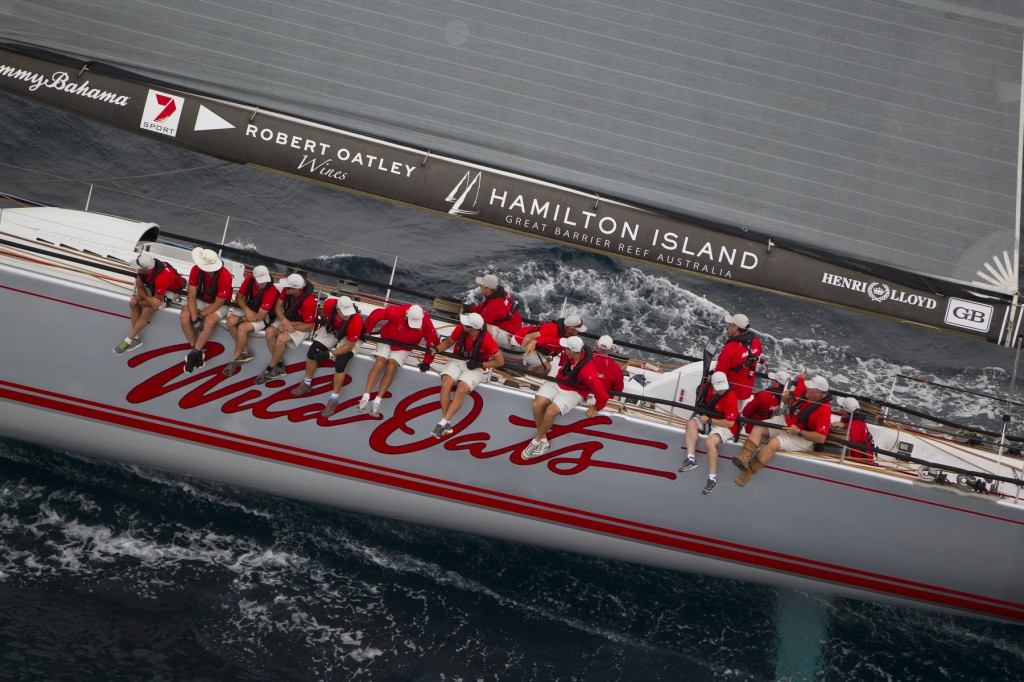 Australian supermaxi, Wild Oats XI, hasn’t had the strong tradewind conditions the crew had hoped for in Transpac 2015 from Los Angeles to Hawaii (Image: Andrea Francolini/AUDI)

It was a much relieved crew aboard the supermaxi, Wild Oats XI, in the Transpac race from Los Angeles to Honolulu early today.

Overnight they had completed two successful missions: they had threaded their way through a constantly changing weather pattern and consequently consolidated their position ahead of their rivals, and also managed to avoid a collision with anything of any significance amid a mass of flotsam and jetsam they encountered.

“It’s been a tough time for everyone overnight,” said navigator Nick White. “I’ve never seen so much rubbish in the ocean. It was everywhere we looked.

“Fortunately that’s all behind us. We’re off and running in a 16 to 20 knot breeze today and seeing up to 20 knots in boat speed.

“Considering where we are, I wouldn’t swap our position with anyone; but it would have been nice to experience the tradewinds and be a few hundred miles further down the track.”

White, who is also a respected meteorologist, said the north-east tradewinds, which are a much vaunted feature of this 2225 nautical mile biennial race, have been virtually non-existent this year.

“There are no tradewinds to be found,” he said, “and it doesn’t look like there will be. The influence of unusual low pressure weather systems to the south of the course has killed them off.”

White did report, however, there was one unexpected visitor aboard the yacht this morning: one of the yacht’s helmsmen, Stu Bannatyne, was hit in the face by a flying fish while he was on deck cleaning his teeth.

“I’m not sure who got the biggest shock, Stu or the flying fish.” White added. “The good news is that Stu is OK: he was able to finish cleaning his teeth. I’m not sure about the fish.”

The challenging wind conditions have destroyed any chance Wild Oats XI might have had for breaking the course record of 5 days, 14 hours, 36 minutes and 20 seconds, held by Neville Crichton’s yacht, Alfa Romeo, a near sistership to Wild Oats XI. Current indications are that Wild Oats XI, which is a joint entry in this race by American, Roy P. Disney, and Australian owner, Bob Oatley AO, will be at least 12 hours outside the record time.

It remains too early to speculate on the finishing order among the big boats in the race, but late today the race tracker showed Wild Oats XI having 1000 nautical miles to go to the finish, while RIO100 (Manouch Moshayedi), and the other Australian supermaxi, Ragamuffin (Syd Fisher), were between 80 and 100 miles further back. Should the existing conditions continue to prevail, Wild Oats XI should finish on Friday afternoon local time.

Rolling the dice amid a debris field…

Rolling the dice amid a debris field…